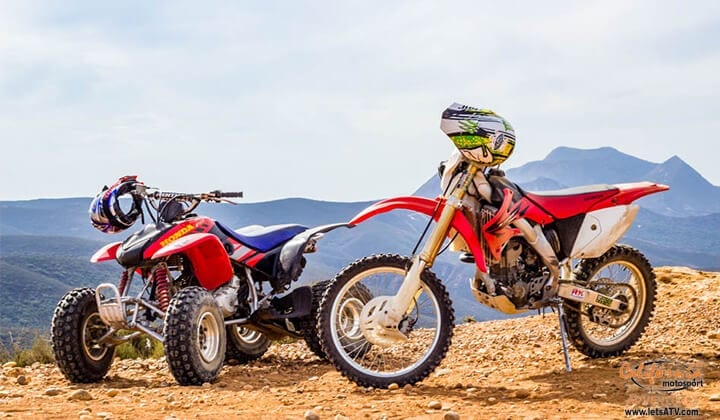 In the community of riders, a lot of debates have been going on for a while as regards which of the two is better- dirk bike or ATV. At face value, you might find a bit of similarity. Yet, their designs and use bring a lot of differences to them. With this insight, you can easily decide on the choice you want.

Below, we will be looking into the differences between each.

ATVs are Not as Safe as Dirk Bikes

ATVs are regarded as safer, but John Hopkins teams have proven otherwise. Although ATVs experience a few accidents, one cannot overrule the deadly outcomes they bring when compared to dirt bikes.  You can also see our full write up on Are Dirt Bikes Safer Than ATVs.

After their comparison, it was discovered that ATV victims had a higher chance of succumbing to their injuries, and many them were more likely to receive intensive care, which is not so with crashes from dirt bikes.

Having more stability and a sturdier look, ATVs are always considered safer. The problem with them, however, is that they are more likely to roll over because they are not built with any protection for their riders. At the end of this roll-over, the riders are often left with deadly injuries.

ATVs have weights that double those of dirt bikes. The implication of this is that dirt bike riders are left with sprains and strains after a crash. The same is not likely to happen with ATV accidents because their victims are left with broken necks and backs.

Additionally, when riders fall off ATVs, bystanders are also likely to suffer these consequences. The same cannot be said for dirt bike riders, you cannot clearly find them flying off the bike. If one crashes off an ATV, the bike also flips and falls on the rider.

The studies reflect how reckless ATVs rider can be. Before you can ride a dirt bike in some states, you are required by law to wear protective gear including helmets. ATVs are not given these stricter rules.

Regardless of the protective helmets they wear, riders of ATVs have a chance of been more severely injured whenever there is a crash. Anyone under the age of 16 is not advised to use ATVs. The issue with this is that most parents always try to get big ATVs for their kids because they believe the kids are likely to “grow into them”. This has been a big issue on its own because many of the kids are not as big and powerful to handle the crash of this big machine.

In price comparison, people will preferably go for the obvious choice of a dirt bike. They have simple designs and need fewer materials to be manufacturing.

When trying to get an ATV, you will spend more money even if they are of the same rider class as the dirt bike. Also, you can easily get the accessories and modifications of dirt bikes because of their popularity.

This poses a problem for ATV users because they have to pay more for maintenance. ATVs requires you to change four tires while you only need to change two tires on a dirt bike. Transporting and storing these two vehicles also have different prices.

Being the bigger one, ATVs are known for taking up more space in a pickup that you can neatly arrange three dirt bikes.

ATVs are Easier to Learn

ATVs can be handled after a 5-minute instruction. The easy control gives it an edge over a dirt bike. The chances of not falling on an ATV are higher because a dirt bike requires that you learn the intricacies for years. You need an intensive understanding of the mechanics of a dirt bike before you can easily ride it.

Anyone who wants to go on off-road trips must first learn how to use ATVs before using dirt bikes. The implication of all these is that for any teacher of dirt bikes, he might have to engage his student more in-depth instruction than he would have done with ATVs.

ATVs are created to engage in numerous activities than expected of a dirt bike. They are also designed with winches useful in pulling and dragging heavy machines, implying that they can be used to remove a stuck ATV out of a trail.

ATVs are also the more preferred choice among hunters because they can help you to easily and efficiently transport games and equipment. Some states, however, forbade the use of ATVs for hunting. One is only allowed to use them for accessing hunting zones.

Another thing you need to realize is how you can use ATVs to carry the essential things for camping trips. It can be used for other functions like to plow snows, mow lawns, spread seeds, load logs, and plow fields. People always go for ATVs because of this.

If you love your dirt bike, you might be restricted to only things that can enter a backpack. These bikes are mainly for recreational function, meaning they are mainly used for riding on trails and nothing else.

Riders enjoy dirt bikes because of their higher speeds when compared to ATVs. Another feature that puts it at the front of others is that it is efficient in moving through narrower spaces, making it the perfect choice for racing as opposed to the massive ATVs.

When it comes to landing and lightness, dirt bikes are designed to withstand these effects. ATVs, on the other hand, cannot easily be used for racing since they are heavier. Moreover, they are slower.

With dirt bikes, their riders are at liberty of performing tricks and stunts, many of which are found in motocross competitions. Most of the things you can do with dirt bikes are not advisable with ATVs. Only experienced riders can do this.

Off-road races are known to be associated with an adrenaline rush. Focusing on the road is always the utmost goal, after which you use your legs and hands to ensure your manipulating brakes, handling throttles, and moving gears and clutch.

In a bid to maintain balance, the rider of a dirt bike must ensure they shift their body weight. In the game, the racer is meant to calculate and analyze the information as well as make a strategic decision.

The same thing can’t be said if you want a fully off-road experience. A dirt bike should be the preferred choice in this area. When racing with this bike, the riders are sure to drive hard, make sharp movements, and descend steep places. ATVs are not built for such things as this.

The designs are such that allow them to last longer and weather any storm in comparison to dirt bikes. During winter, you can easily change their tires to snow tires on ATVs.

ATVs are useful for plowing snow and clearing driveways among other areas. ATV designs allow the accessibility and chances to navigate through different terrains including snows, muds, and sands.

During certain weather conditions, you cannot ride dirt bikes because they can cause you to slip. And that means you can only ride it in summer.

ATVs have suspensions that give them off as robust and well-built vehicles because they are more functional. Also, they give off comfortability because they are provided with a more relaxed seating position. This is not the same with dirt bikes because the riders are mostly standing.

The suspension of dirt bikes is rougher and that has given them the edge in trail racing. ATVs are better suited for small, tall, or people suffering from back problems. For those gunning for comfort, ATVs are the best choice.

Dirt Bikes are not ideal for Kids and Beginners

The rule of some states imply that kids should be supervised whenever they were using dirt bikes. As long as the kids are below 16, ATVs are still the better choice. Some states have put an utter ban on the usage of dirt bikes by kids under 16.

ATVs have unique modifications that fit children’s body frame. Some of the modifications are low engine power, unique driving instruments, and comfortable seats. A bike with these modifications allows a reduction in the risk of injury and help in driving safer. Regardless of which of these the children go for, they should always wear protective gear while operating these gears.

ATVs are created to carry out several functions. Thus, they are constructed to absorb impacts. Although dirt bikes also get the same beating as they, ATVs are more likely to last longer.

ATVs were created with a tougher frame, which allows for models over 20 to 30 years to remain in use. If you wanted a bike that can last longer, ATV should be the better choice.

As shown by the previous argument, ATVs have four wheels and are more stable than two wheels. With this stability, riders can easily manipulate the car to keep the risk of accident at a minimum in comparison to a dirt bike.

Two-wheel dirt bikes are more susceptible to surrounding conditions including wind. This problem can also affect the ride because it can be controlled by the wind.

The average weight of a dirt bike is below 200 pounds, and that allows easy transportation. The bike can be lifted because of its lightweight, even if there is any situation warranting that.

ATVs, on the other hand, are above 1000 pounds, which means that you cannot easily transport them. Some trucks find it hard to carry one ATV. You only need to lift a dirt bike with a pickup.

People find fun when they are in the company of others. A dirt bike can carry only one person, but with an ATV, you have a higher chance of getting more people to follow you on your off-road adventure. Most times, it is always advisable to avoid children.

Moreover, ATVs have excess space at the back that allows for the carrying of other passengers. While this is not a good practice, a lot of people use it.

ATVs are more expensive and carter for more fuel usages. ATVs have stronger engines than a dirt bike.

Dirt bikes consume less energy and only get spiked usage whenever they encounter any obstacle or are in a race. Different conditions also affect fuel usage.

Despite this, some models are created just for fun and those who care less about consuming fuel.

Despite the stronger motors in ATVs, you can never make them successfully compete with a dirt bike in a race. Their speeds outmatch those of ATVs. Due to their lightweight and chance to take sharper curves.

This holds true even if the two of them are pitted against each other on a straight road. Dirt bikes come with the power to better weight ratio. This gives them the ability for faster acceleration than an ATV will allow.

Which Should You Buy?

Since you have seen the various reasons you can opt for any of the two, you only have to make a decision based on your need. But if you are a beginner, an ATV is your best bet.

Best 125cc Dirt Bike For Beginners Are you a fan of motorcycles? Do you enjoy riding…

Do You Need a License for a Dirt Bike

Do You Need a License to Ride & Drive a Dirt Bike? On a general note,…

How to Become a Dirt Bike Racer