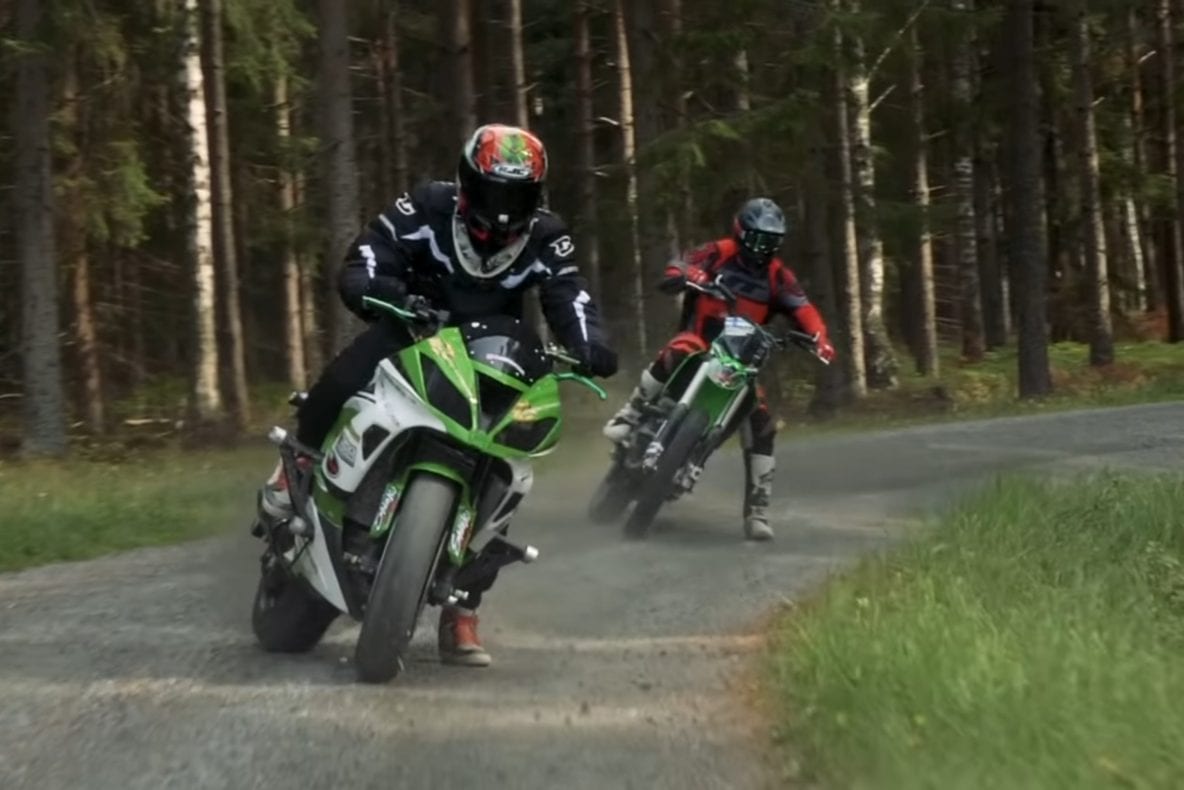 Street Sport Motorcycle vs Dirt Bike – What is the Difference?

Many people love riding off-road motorcycles. At the same time, there are quite a few people who ride other motorcycles that are commonly called “crotch rockets” all the same, but these aren’t the typical off-road dirt bikes that we normally see riding BMX derbies. These are what are called street bikes. And while they share a lot of similarities, there are many things that set dirt bikes and street bikes apart from one another, even though they can generally be similar in size and even appearance. We’re going to look at what the difference between street bikes vs. dirt bikes are, and clarify some misinformation out there that people have.

The Weights are Much Different

One thing that people notice about street bikes compared to dirt bikes, is that while they are similar in height and even length, the overall size of the street bike is much bigger. This is because they have more on their frame to provide a different type of riding experience. Dirt bikes often are considered barebones bikes compared to those that are meant for street riding and racing. This is so the average dirt bike rider can have more control over their bikes and be able to take sharper curves and handle the bike better.

Part of this is so that they have better handling and are able to overcome obstacles that come with riding primarily on a dirt track. Dirt bikes are generally a single-cylinder engine, and they’re able to run rampant on the uneven terrain they’re meant for.

When it comes to street bikes, they’re meant to handle riding on the road and be around other cars. If you were to drive past certain vehicles, the drag that is created form them would be harder to handle the bike with on a dirt bike. Therefore, these bikes are designed to overcome this hurdle and provide a more sturdy riding experience on paved roadways.

The Tires are Different

You can generally see that the tires are quite different on a dirt bike compared to a street bike as well. You can easily say that the difference is similar to that of a running shoe compared to that of a baseball cleat. Dirt bike tires are created to dig into the terrain that is made of loose soil to provide maximum traction. If they were to be used on the street, the tires would quickly shred much faster than they do on dirt tracks.

In the same light, street bikes are designed to be less narrow (as dirt bike tires are), and they’re meant more to have a smoother shape similar to an automobile. The average street bike tire doesn’t have as much space between the treads so that they have constant rubber on the pavement to provide maximum traction much like a regular vehicle would have.

The Suspensions Are Built Differently To

Another thing to consider is the difference in the suspension. When you’re driving a motorbike, you’re probably going to do a lot more off-roading. Therefore, the suspension is meant to have more shock absorption that a regular street bike wouldn’t be able to handle. With all of the bumps, you will need to have a much more resilient shock absorption kit in a dirt bike.

While street motorcycles are meant to absorb some shock and keep them more on the road than off, the suspension’s ability to provide shock absorption is much less. More than likely on a Kawasaki Ninja street bike, you’re going to go faster speeds, but you aren’t going to be doing a bunch of tricks that you would see the average motocross driver perform at the X-Games.

The Seat’s Different Too

If you carefully observe the two different types of bikes, you’ll notice that the way the seats are designed is much different as well. Most motocross riders are able to stand up on their bikes with ease, and the seats are forward facing so that the person riding the dirt bike can adjust to a new position quickly. At the same time, dirt bikes allow the user to sit more upright so your feet are right below you – as you’ll be moving constantly while you ride and have to stand up a lot.

Street bikes don’t provide this seat positioning. When you’re slicing through the air at high speeds, you don’t want to end up sitting like this for a very long time. Therefore, street bikes have their seats further back so the rider can relax more, and allows for a more ergonomic and aerodynamic feel to the riding experience. The seat is also often a little higher so you can see over the handlebars much easier.

One thing that people don’t realize, is that dirt bikes are meant for short-term travel. You’re probably not going to see someone driving a dirt bike across the entire state or country, but you might see someone riding a street bike travelling longer distances. Of course, they may not get as much mileage as a Harley Davidson, but these bikes still have bigger gas tanks than a dirt bike has. This adds to the weight of the bikes as well, which is something that makes a dirt bike what it is – a featherweight motorcycle for turning some wicked tricks!

So, when it comes to the differences between a dirt bike and a street bike, you can see there are dramatic differences that set these two popular riding hobbies their own beast. However, there are still some things that make them very similar – even though their makeup is completely different. The most important thing that makes a dirt bike what it is compared to a street bike, is the overall frame of the bike. Since dirt bikes are made with the bare minimum in terms of frames, handling, tires, and more, they’re still better at riding on off-road terrain compared to a street bike. Whatever you choose to ride, just make sure that you practice the same safety measures for both of them, and always wear your helmet (even if the laws don’t require one where you’re riding at).