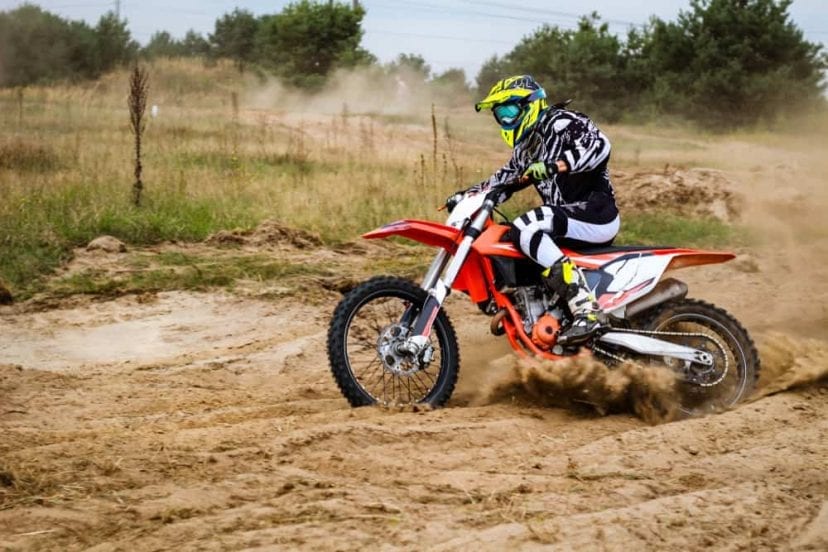 What is the 250cc Dirt Bike Top Speed?  Max in MPH for Motorcycle

If you’ve ever ridden a dirt bike, then you probably already know that it’s more than just an exhilarating time. As a matter of fact, you probably also know that it’s one of the best ways to get your adrenaline and blood pumping. If you’ve never ridden a 250cc dirt bike, then you may want to read this guide so you know just how fast your dirt bike can go (and always maintain optimum safety when riding). You may have to practice riding regular terrain before you go off-roading on your bike so you don’t get hurt. But how fast is a 250cc dirt bike? It doesn’t seem like a lot, since a 250cc four wheeler or ATV doesn’t seem to go very fast. We’ll uncover the truth for you in this guide.

Are Dirt Bikes Safer Than ATVs

Most ATVs only travel at around a maximum speed of about 35-50 miles per hour when they have a 250cc engine. However, a dirt bike accelerates a lot faster, and it also can deliver a higher maximum speed than an ATV.

Most dirt bikes can acquire top speeds of anywhere from 55 miles per hour all the way up to 75 miles per hour, but this depends greatly on the type of engine that the bike has, as well as other factors. So, let’s look into those factors shall we?

When it comes to the brands of dirt bikes, there are a great deal of types. From Yamaha, to Kawasaki, and even Honda (as well as other brands), these all affect the top speeds of your bike. One thing to note also, is that the model of each brand also determines somewhat the top speed of your bike, and so do the tires.

The tires themselves can also help you achieve a greater max speed. If you are wanting higher speeds, which is recommended at advanced levels only, then you will want lighter tires. Heavier tires will allow you to ride your bike with more grace however, although you won’t be able to get going as fast as you would if you were using lighter tires. When you change to the lighter weight tires, you will lose some traction and handling – hence why it’s more dangerous if you’re new to riding.

When you want to increase your speeds more, you can also take advantage of making the seat lighter. Anytime you do this, you do sacrifice a little bit of handling power, and you can always leave the original seat on the bike, but if you want that little bit of edge, you can always purchase a seat cover or even an entire seat itself that is more lightweight and sleeker. You can also customize your bike this way to give you more comfort too.

Many exhaust systems are steel or aluminum, and these parts can be extremely heavy. Therefore, you can opt for an alternative material like titanium to make the exhaust system lighter as well. If you choose to switch to something like titanium though, you may want to ensure that you have your wallet handy – these materials cost much more than aluminum or steel, but they’re often well worth the price.

Don’t ever forget that the more you practice riding, the better you’ll get at doing certain things, and even improving your speed. The way you lean at certain times, and the way that you sit back can greatly impact your speed, but give you a bit of momentum and aerodynamic advantage that you need. If you’re wanting to ride a dirt bike like a pro, you need to keep in mind that they’ve been often riding for a very long time, and have had time to hone their skills. Let alone if you’re wanting to do tricks, don’t ever think that you’re just going to go from 0 to 60 to practice little tricks – many riders don’t ever start practicing these things until they’re at a very advanced level, and they also usually start practicing tricks at lower speeds before they ever attempt them at faster speeds.

One thing that you should also remember is that the weight of the rider has a great impact at how fast the 250cc dirt bike can go. And not only does your weight matter, but your clothing matters a great deal. Every ounce of clothing that weighs you down can slow your bike and your ride down, let alone affect your aerodynamics.

Measure and Map Your Terrain Too – The Track

Terrain plays a humongous part on improving the speed of your dirt bike. If you’re wanting to ride your dirt bike on sand or loose soil, then you’re going to going to need to know how fast you are going to be able to go before you reach your destination, or before an obstacle (such is the case for motocross tracks with obstacles and obstacle courses). The type of dirt affects your speeds and handling, and your jumping areas can affect your speed as well. Depending on the pitch, and the angle itself of the ramp that you’re trying to ride or jump from, you need to know just how much faster you’re going to need to go to make it (as you elevate uphill, you could slow down quickly).

No matter what you do, it appears that everything mentioned above are the top contributing factors to how fast a 250cc dirt bike can go. The faster you want to go, the more you’re going to have to knock off of the overall weight of the bike. It also can be determined that the more you reduce the weight of your bike, the higher the risk of your bike not being able to grip the ground as much either.

How to Transport A Dirt Bike

Transportation & Hauling Dirt Bikes Guide No matter the location of your dirt bike, there are…

How to Design & Build a Dirt Bike Track Dirt biking is an enjoyable activity, especially…