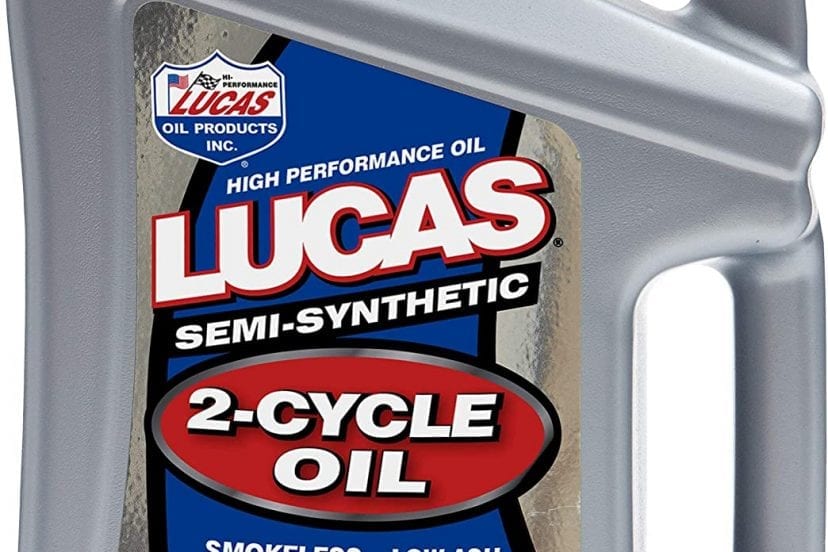 What is the Top 2 Stroke Oil for Dirt Bikes?

Two-Stroke dirt bikes require high-quality oil to function properly and last longer. Oil serves many purposes aside from the lubrication of engine parts. It picks up dirt as it flows, thereby keeping the engine free of particles.

Oil also protects the engine from overheating, but this is among one of its lesser uses. Provided the oil is changed often, the engine’s running will remain top-notch, and the engine’s status stays high quality.

There are three main categories of two-stroke dirt bike oil. The first category is castor based oil. They are organic and hence are known for leaving carbon residue. They need a lot of maintenance because of this.

They are also known to separate from gasoline during the cold weather, so winter riding is out of the question if you use castor oils. However, it has unmatched lubrication qualities and provides heat protection to the engine parts.

The second category is the semi-synthetic oils. They are mixtures of castor and synthetic oils that can give the best of both worlds. The ideal ratio is 80:20 synthetic to castor oil. They give optimal performance and require less maintenance than pure oils.

They burn clean and are, therefore, good for the environment. They also provide excellent lubrication to the motor parts. They are affordable and hence widely preferred by many dirt bike riders.

The final category is fully synthetic oils. They are premium oils that can be used all year round and do not lose their cold-weather performance. Riders who are interested in having a little fun in the winter season can do so without worry.

They are consistent in any weather because of how they blend well with gasoline. However, they are not as good as castor oils in terms of heat protection and lubrication. They also leave chalky deposits on the exhaust pipe.

Looking for the Best 4 Stroke Dirt Bike Engine Oil instead? 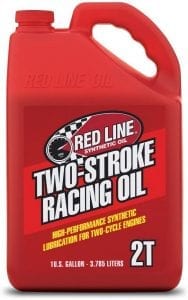 Red Line oils have been among the best oils available in the market for over fort years. It falls under the category of fully synthetic oils. It is preferred by many riders who take their performance to the edge.

It is stable in high temperatures and is great in competitions and longer riding sessions. It leaves no residue in the exhaust, and because of the clean burn, it is environmentally friendly.  It does not emit any carbon-based products and is clean.

The oil can be used without mixing it with any other oil. It is versatile and usable in various two-stroke engines like in snowmobiles and other motorized equipment. It is also certified for use in races.

It produces more power as you keep riding and continues to have optimum performance because of gains ranging from three to five percent. Shifting is easier, and combustion chambers and the piston crowns remain clear. 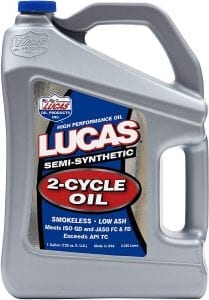 Lucas oils have also been of excellent quality for years. This particular one is blended to make semi-synthetic oil that boasts of no emissions. The formula is a blend of mineral oil and synthetic oil together with an additive.

It gives a clean burn making it good for the environment and great for your bike. It is suitable for air-cooled engines. Because of its low-ash content, it is preferred by people interested in clean living.

By using this oil, you can be certain that the exhaust will not be blocked. It produces no residues keeping the interior of the motor clear. The oil can be diluted to make it blend easily with gasoline at various temperatures.

This makes it suitable for longer rides and in some competitions. Even though it is versatile enough for other two-stroke engines, it is not suitable for certain motorized tools that need lesser ratios. 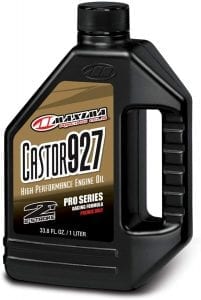 Maxima are well known for their high-quality racing oils. The Castor927 falls under the category of castor oils but has been modified to eliminate all of the drawbacks of castor-based oils. It has been highly refined, making it biodegradable hence good for the environment.

It is suitable for use in races because of the additives that make it perform well at a range of temperatures. Riders can rest assured that they are not polluting the air because this oil has been made to burn cleanly.

It also does not leave residue in parts of the engine and leaves them clear and clean. It has excellent lubricating qualities that enhance the performance of the pistons and the dirt bike overall.

It is made to withstand carbonization and vaporization to keep it working for longer. They cannot be used in oil injection systems. However, they can be used as premix oil with both leaded and unleaded gasoline. 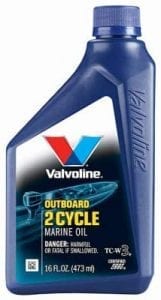 It prevents corrosion and wearing parts of the engine and provides rust protection when the bikes are stored. It burns cleanly, therefore having no emission into the atmosphere. It also leaves no deposits in the engine parts.

It is very versatile and can work with either premix or injection engines. It also works with engines that use liquid coolant and those that are air-cooled. It also performs well in engines that need a gas-oil mixture.

It works with several other machines apart from the dirt bike engine like the lawnmower and jet skis. 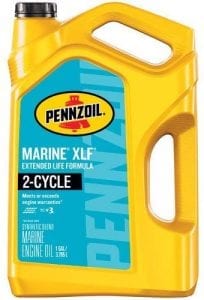 It is designed for clean running of the engine. It also gives protection against scuffing in the motor giving it more sustained performance. It leaves the engine parts clear of any carbon deposits.

The oil works with oil injection monitors and can even be used as a premix. It is certified for use with many different engines because it is versatile. It is almost guaranteed that it will work with your bike without any hitch.

It does not burn and the others and does not have the required lubricating properties necessary for dirt bikes’ high-quality performance. It has a low film strength protection and could lead to damage in the motors if used.

Once you get the premix oil of your choice, you have to mix it with gasoline. The preferred type of gas you need has to be free of ethanol because of the carbon deposits they leave in the pistons and combustion chamber.

However, it is rare getting ethanol-free gas, so the best alternative is gasoline with not more than ten percent ethanol. An oil-gas ratio of 32:1 used to be the preferred ratio. However, due to external factors like terrain and elevation, the ratio changed to up to 60:1.

Riding without premix could seize up the engine, and riding with too much, damages the spark plugs. So, the ideal amount has to be as much oil as possible to maintain a clear engine. Older models run well with the 32:1 ratio, and newer models run on the 50:1 ratio.

To get more accuracy, it is advisable to mix it in a gas can before pouring it into the engine. First, using a measuring cup, measure the fuel, and pour it into the gas can. Then, take the premix and pour it in the fuel and mix them.

When you are not planning to ride for a while, you should drain the tank so that the fuel does not become sticky.

Dirt bikes require frequent oil changes compared to other motorcycles because of the nature of dirt biking. The oil can be contaminated by dirt, debris, and other small items that go through the air filter.

During combustion, small pieces of carbon get into the oil and result in the oil’s darkening. However, the most common pollutant is small particles of aluminum, and they may damage the clutch.

Large quantities of pollutants in oil reduce its lubrication abilities and cause the wearing of several parts of the engine. How regular oil needs to be changed depends on which type of oil you use.

Mineral-based oil needs a change every two thousand miles because they already have poor lubrication qualities. The contaminants render them totally unusable. Semi-synthetic oil should be changed after about six thousand miles.

Fully synthetic oils are useable for a long time and should be changed after about seven thousand to ten thousand miles. If you ride regularly or travel often, you need to change the oil now and then.

You need to determine with your eyes if it is time for a change. A dipstick will allow you to take a look at the oil and scrutinize it. The standard color of the oil is brown to slightly black. A darker color than those two means the oil is very contaminated.

Watery oil needs a change as well. Other ways to examine the oil are by removing the oil level plug or the oil sight window.

Oils for two-stroke engines are specialized. Two-stroke engines use a premix of gas and oil that gets combusted to lubricate the piston and rings. They also use oils safe for injector systems. In this case, the manufacturer recommends the perfect ratio.

You must select the best oil for your dirt bikes. This will depend on how often you ride and what type of engine you have. Dirt bikes vary, and because of that, manufacturers often give recommendations on the type of oils that can be used.

Riders should also pay attention to whether the oils can damage their motors. Premixes with ethanol-gasoline will result in residues of carbon particles that can cause blockages. They are bad for the environment because of air pollution.

Synthetic and semi-synthetic oils last longer than mineral-based oil. They offer better lubrication qualities, and this capacity cannot be easily compromised with pollutants. So riders who use mineral-based oil should make a point to change their oil often.

If you ride regularly or take many trips, it is important to change your oil often. If you do not plan on riding for a long period, drain the oil from the tank to avoid gumming up. There are reputable brands that manufacture high-quality oil that raiders should buy.

I would recommend Red Line two-stroke oil. It is fully synthetic and has the highest film strength protection and lubrication capacity. It is free of pollutant emissions and does not cause blocking of the pistons.

It is stable at a varying range of temperatures making it suitable for races and long-distance riding. Get yourself the Red Line oil for high-quality performance.

Best Dirt Bike Helmet For Beginners The importance of dirt bike helmets should never be underestimated.…