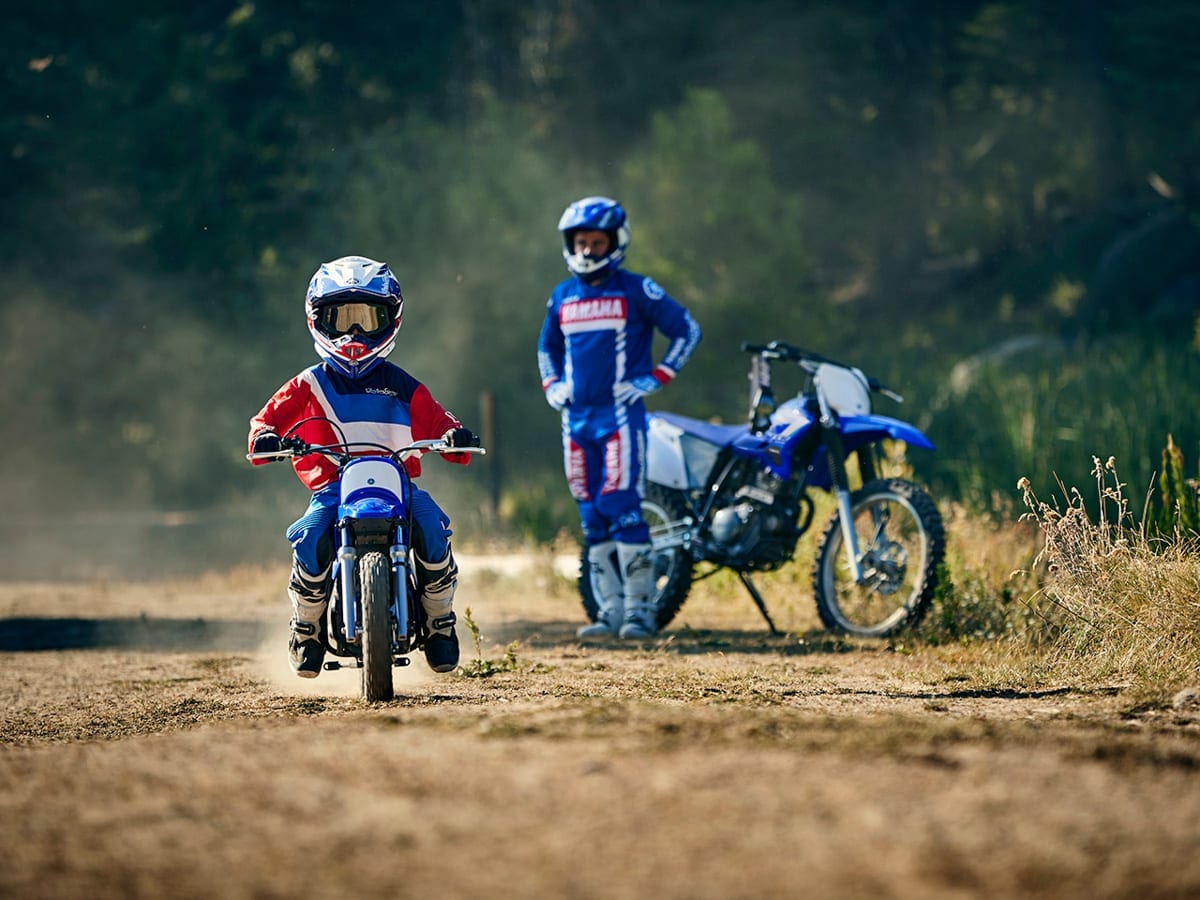 One of the excellent family hobbies is Dirt bike riding. You also get a sense of togetherness. Many parents get very nervous about letting their kids on dirt bikes, as you might have seen or heard about accidents on the dirt road.

Dirt biking is not very safe to ride but it gives you the access to study the risks which might be involved in and then you can take necessary steps to protect yourself from it. However, one question which you might have is whether it is safe to give dirt bikes which might be dangerous for your kids.

Young kids about three years old can start riding small electric dirt bikes. A 4-year-old child can very swiftly ride a 50cc dirt bike which has training wheels fitted to it. After the child reaches the age of 5 or 6 you can eliminate the training wheels.

Is Your Child Ready to Ride a Dirt Bike?

Overall, there is no particular age limit when it comes to introducing dirt biking to your child. It totally depends on the capability of the child and how much he will be able to handle the off-road driving rigors, as every child has a different maturity level. You can start off with the lighter models when the child is young.

There are many child-friendly electric models. When they reach the age of six, they can start using the supervised short rides which have advanced machines. There are many 8-year old’s who are so experienced that it becomes hard for us to keep up with them on the trail.

Dirt bikes can be used by children of all ages. However, here are certain bikes which are known to be child friendly. It is very important to understand the difference amongst the dirt bikes to get an ideal dirt bike which would suit your needs.

A bike which would be perfect for a 4-year-old might not be good for a 6-year-old. So, you should always consider the child’s age when buying a dirt bike for your child. The main difference between dirt bikes is power. Gradually, the child would be able to ride bikes with over 250ccs in engine power. The machine which is less powerful is safer for a beginner. Never let a child use powerful bikes, when they lack necessary skills.

Once the child reaches the age of seven to ten years, they would need a dirt bike with more speed and power as they now have increased adrenaline. The dirt bike which would suit a child of 7-10-year-old is the 70 to 100 cc model. However, you should make sure that they are in a position to handle a more powerful motorcycle. The main goal is to keep your child safe. So only let them ride the bike. You should opt for only branded bikes as they are reliable such as Honda, Suzuki, Yamaha, Hyosung, Beta, Maico, Razor, Kawasaki and KTM.

Choosing the Right Bike for Your Child

The bike you choose for your kid will either make them happy about learning the sport or would frustrate them and make them weary of riding off-road. Do not choose something your child does not like. However, their safety is the utmost priority and you should always consider it the top priority while ordering the bike. The other thing which you should observe, while your child rides the bike, is their hand strength. You need to check if they can handle the bars of the bike. Select a tight and comfortable grip on the handle. Also, you need to find if the child is able to hold back the bike’s throttle nicely and has a firm balance while riding. The posture in which your child drives the bike should be correct. This is one of the most important factors when riding the dirt bike correctly. You need to have an upright position when riding through the bumps.

One thing you must know about the dirt bike is that some torque can be too powerful for your child. To prevent this from happening to your kids check the torque features. Choose a bike that fits your child’s body strength, age, weight and height. Always purchase a dirt bike sensibly as your child would outgrow them pretty quickly. There are two types of dirt bikes- two-stroke and four-stroke. A two-stroke dirt bike is good for beginners.

According to the age group dirt bike can be divided in the following categories:

Your guidance is mandatory as it will make them comfortable. The kids which are this young are not that aware and might not have adequate strength to ride the bike themselves. It is necessary to fix safety bars so that the motorcycle remains in an upright position from all times. Nowadays you will find electric and battery-powered models for this age group.

Many Professional bikers show signs at this age, you may get a bike which is higher-priced for your child but has a safety gear which is top-notch. Many children ask for loud models as they come to understand that dirt bike racing is a sport at this stage. So, you may calm down and stay put and see your child perform.

The other name by which dirt biking is contact sport. In this game your kids will continuously fall, this happens mainly when they are learning the basics. This is something which can’t be avoided. The only thing you can do is reduce the impact of such crashes.

The gear which is needed are:

Helmet- The upper part of your child’s body also known as the brain needs most protection. The product which protects the head should be of good quality, the one which is DOT-approved is the best helmet. Your child should always have a full-face helmet while on the dirt track. Make sure the helmet fits perfectly, it should not be very tight neither loose.

Goggles- Your child would also need a pair of goggles which will keep them protected from debris and let the dirt remain away from their eyes.

Gloves– You need mountain bike gloves to protect your child’s hands. Buy gloves which are perfect for a dirt bike. If they wear them it will keep them away from blisters.

Boots– Your child would also need a pair of good boots which will protect their feet on the dirt trail.  Make sure it is a perfect fit.

Elbow and Knee Guard- The young ones may hurt their elbows and knees when they fall while riding. Functional padding is a necessity.

Body Armor– The child’s back and chest also require a lot of protection. Buy a good body armor which is good enough to protect its body and gives you peace of mind.