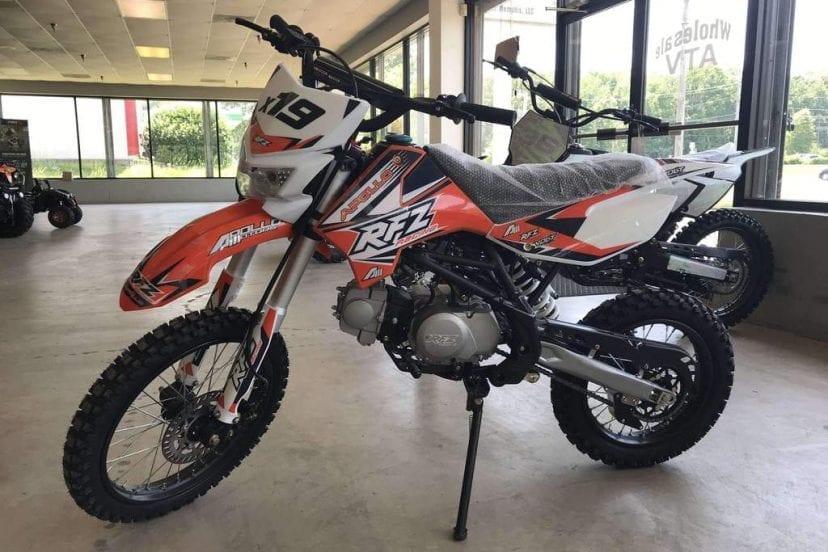 One of the famous dirt bikes since 2005 is the Apollo 125cc Dirt Bike. These are best known bikes that can be found on a reasonable and expensive budget.

You will get an expensive or a cheap Apollo Dirt Bike, which totally depends on the amount you want to spend. These 125cc dirt bikes are the ones which can be used by both teenagers and adults. If you follow the necessary safety precautions it is the bike which can give you one-of-a-kind experience.

The speed which the125cc dirt bikes can take depends from manufacturer to manufacturer. Although their average is 45mph the Apollo 125cc dirt bikes can go to a maximum speed of at 55 mph, while other models can even reach a speed of 60 mph. Some riders have even stated that they pushed their dirt bikes to almost 80mph. Every fast bike is expensive and the amount you are ready to spend would determine the speed of your bike. When it comes to speed even Two-strokes and four-stroke bikes differ, the latter has a typical speed limit of 35 to 55mph while the two-stroke bikes tend to be faster. Some riders have stated that their models can reach speeds of 100 mph.

When researched a two-stroke bike will have higher speeds when you compare it to a four-stroke which has a similar engine. You should remember that the two-strokes are not designed for long trails and they will only keep the pace, until the engine stalls. On the 125cc bikes the acceleration is seen to be as short as four seconds. If you observe you can reach the top speed on a manual dirt bike faster than when you use an automatic bike. Two strokes also go faster and are preferred when racing on the track.

These speeds are though dangerous when it comes to beginners and teenagers. Many older kids may get tempted to push its limits when they are on the field. So, you need to ensure they have protective gear to reduce the risks of falls and injuries. Modification is one option on a 125cc dirt bike if you are looking for more speed. You can do this by replacing the stock sprockets of the bike and also ensuring that you do not damage the low-end torque acceleration.

It will give you an extra five miles per hour on your dirt bike. This can make a huge difference when it comes to travelling on dirt roads. However, unless you are aware of how the motorcycle’s sprocket gearing system works it is better not to do the modifications.

Are Dirt Bikes Apollo 125cc Safe For Teenagers Or Adults?

125cc dirt bikes can be used by kids who are more than 12-year-old. These bikes go very fast. Unless the rider has perfect level of control while riding a two wheeled ride, they should not be riding this one.

Many parents do not give permission to their kids to ride fast bikes until they are more experienced. The speed this bike gives the rider even complicates the facts. Many riders report maximum speeds than what is quoted by manufacturers originally.

Apollo is a very new brand in the dirt bike manufacturer list. Some buyers are hesitant to buy these bikes and always are in favor of manufacturers which have been in the dirt bike business for a long time. Many companies are so notorious that they use cheap materials. However, Apollo is known for its durable products and has exceeded the expectation of its riders. These dirt bikes are sturdy, durable & reliable and made of high-quality materials. Apollo does its own testing, R&D and develops the parts in house. They are committed to product quality, and riders love the resilience of their models.

To maintain an Apollo 125cc dirt bike, it requires tons of patience. Air filter is supposed to be cleaned after every ride so that you can get any dust and debris. If the air filter is dirty it will affect the fuel system and engine.  Also, you need to change the oil regularly. If you want to reduce the occurrence of flat tires on the road, make sure you have checked the pressure in the tire before you ride the bike, always make sure to invest in backup tubes. Spark plug needs to be regularly changed.

Listed below is the review of two Apollo 125cc dirt bikes which are very famous in the market.

The Apollo DB-X18-125cc dirt bike is best when it comes to beginners learning bikes. Although it is also good for experts. These bikes can be used for short rides. It gets its power from an engine which is four stroke and can deliver 7,500 RPM of torque. The highest speed is 55mph and you can get an amazing speed when you drive it on the street and the trails. It also has a manual clutch transmission which has four speeds. The brakes both front and back use the hydraulic discs which helps the bike to come to a stop.

As you can change the air filter you can be relaxed about the dirty trails your bike will be exploring. These bikes are available in the market in numerous colors which include colors such as red, green and blue.

This model has a gross weight of 180.8 lbs. and net weight of 47.7 lbs. respectively. Adult riders will find it very easy to manage and control this bike on the road. The fuel capacity of this bike is 1.03 gallons which is perfect for minor trails. The person who is interested in buying this bike should consider the seat of the bike as its height is 36.5 inches. However, this is ideal for riders who have a height of about 5.2 inches. The bike can handle a weight of around 220 lbs.

This bike’s power is smooth and controllable and it has an air-cooling system which comes in very handy when you are in rough terrains. Even after such a bumpy ride the motorcycle will remain cool. This bike does not make loud noises even when it is climbing high terrains and makes your ride a quiet one as you will not be disturbing others on the road. The handlebars of the rider are adjustable which makes it easy to maneuver the bike. It can be started by kick starting it and the Ignition C.D.I starting system is also provided. Even though the bike ride is amazing, you might find the carburetor is inefficient.

The Apollo DB-007 125cc dirt bike is one of the best and the most popular bikes because of its fast pick up even when it is on rough terrains and bumpy areas. The frame of the bike is made of heavy durable materials which ensures that the bike does not falter in harsh conditions. The steel does not rust and can be used for years and years to come.

This dirt bike is very comfortable and is good at what it is meant to do. The seating is comfortable as a foam pad is provided on it. The handlebars are stable and have a grip which is robust.  Maneuvering this bike is as easy as maneuvering the Apollo DB-007. The sporty red look is one of the favorite looks, which is loved by many individuals. This look gives the bike a sporty yet aesthetic look. Like the Apollo DB-007 it has a four-stroke, single-cylinder 125cc engine which gives a 9,500rpm torque.

The bike has an air-cooled system which keeps the engine cool and keeps it going for many hours. The top speeds of 55 mph in high terrains, it was expected to have much lesser in rough terrains. Thus, the expectation is exceeded. The seat height of the bike is 28 inches and a gross weight is 185 lbs. and net weight is 148 lbs. The capacity of the fuel tank is one gallon which is adequate for small trips. People have to assemble the bike parts, sometimes this can be really confusing because there are many spare parts which are given. It is difficult to clean the carburetor as it can’t be opened.

Apollo does make dirt bikes which are in everyone’s budget and are durable. The 125cc line has very amazing dirt bike models which give you a one of a kind experience. You can use these bikes for racing as well trails which are simple. These bikes are loved by teenagers and adults. However, the kid needs to be sure about his riding skills before they start to ride.