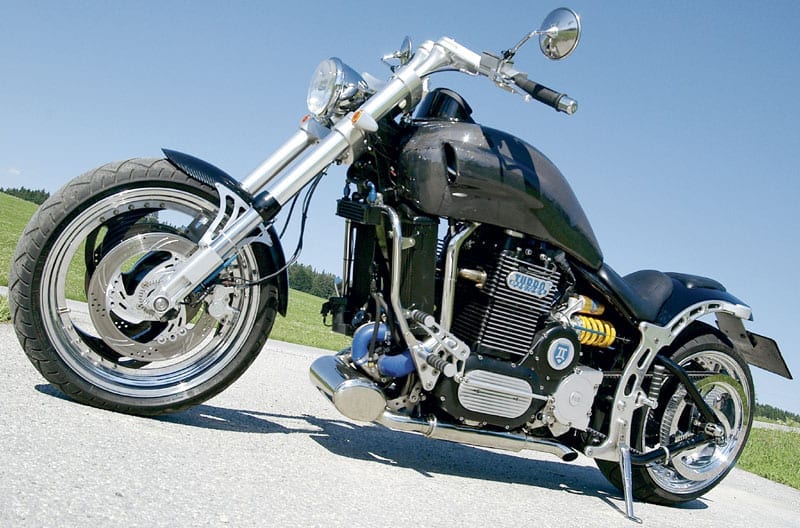 What are the Top Diesel Powered Motorcycle Brands?

With a rise in the popularity of engines powered by petrol in today’s market, diesel motorcycles have been rare. There are many benefits that diesel engines confer to their users, some of which include indestructibility, reliability, durability, and low cost. Even with all the benefits highlighted, these engines are still not popular in the marketplace.

It takes a great deal of specialized engineering to develop a diesel engine that can dispense significant power while being light-weighted.

That is the reason it seems like petrol-driven vehicles have dominated the scene. It is still very possible to have quite a few diesel-powered motorcycles, even though they are rare. Some diesel vehicles that have remained sustained through time include:

They state this bike to be one of the best motorcycles ever manufactured. It is a German-built motorbike, manufactured by the Neander AG company. It is powered by a turbocharged-diesel-motor (1430cc oil/air-cooled). The performance of this diesel engine is far beyond that of an average car, it can produce 112bhp at 4200 revolutions per minute.

The dry weight of the bike is about 270kg, and the weight of the engine covers half of this total weight. The effect of this is that you immediately get the highest torque at any rpm. With this torque, it is almost difficult for the motorcycle to get stalled in any gear, yet expect a maximum speed of 240km/h.

Many features sponsor the uniqueness of the Neander 1400. It possesses a cylinder head structure that was copied from BMW; it also has 108 by 78.2mm cylinders. Garett made the turbocharged cylinder, and the gearbox has striking similarities with Aprilia REV1000R. The motorbike has a direct-fuel injection and also a 16:1 compression.

For every 100km, this bike consumes only 4.4 liters of diesel, which makes it economical as compared to many others. This bike can cruise without minimal vibrations, and the noise it makes is the typical noise cruiser bikes make.

Generally, this bike performs well as you hit the road; the only thing most people complain about is its immense size and humongous price.

The full name of this vehicle is ‘Royal Enfield Bullet,’ and it remains the only diesel motorcycle that is produced in mass globally. This vehicle has been long-running since as far back as 1948, but they first introduced it into the market in 1931.

This motorcycle is of the class of old motorbikes since its design portrays it that way. Even with its old look, there has been an upgrade of the painted body of this bike from black to multiple colors. The new color variants that now exist for this bike include- Onyx Black, Sapphire Blue, and Bullet Silver.

The features of this bike include wheels that are 19-inches, front and rear discs of 280 and 153 mm each. The company has also designed a teardrop fuel tank and a one-stepped seat.

Shock absorbers at the back of the motorcycle and telescopic front forks offer a great deal of suspension to this motorcycle. The specifications of this motorcycle make you comfortable during a ride.

The engine which powers this bike is that of a single-cylinder 346cc Lombardini engine powers up this bike. The motor of the bike is four-stroked, and it gives lower than 7hp; it also gives off about 1160 miles for every gallon. This motorcycle’s top speed is about 50mph.

Evaproducts, a Dutch company, are the manufacturers of this bike. It is easy to confuse this bike for modern bikes because of the sleek and fancy design. The design of this bike closely resembles that of Yamaha Superbike.

The target audience for this bike includes long-distance travelers and adventurers since it can go up to 140 miles for each gallon. It has a turbocharged 3-cylinder engine, and they adapted the design from SmartCar. The essence of this is to give 45 hp per tap with a torque of 78 Ib-ft.

The maximum speed of this vehicle is about 110mph.

For every 0-60 mph, the motor of the RE Bullet 350 gives about four seconds; this vehicle was isn’t so powerful. Here are other features that this bike possesses:

Never make the mistake of blipping the throttle when red lights are present. The best thing to do as you engage is to shoot and drive forward. We can label this bike as a niche motorbike- just 50 of this motorcycle have been bought from its onset in 2009.

What is used to advertise this bike’s capacity is a distance of 250,000 miles for its overall engine life, meaning it doesn’t wear off quickly. As of 2012, the manufacturers stopped producing this vehicle, but now, you can purchase the blueprints to build yours.

This bike has been said to have a military origin, which makes for its rugged nature and durability. It was first manufactured in the UK and was developed at the Cranfield University, and they adapt its design from a Kawasaki KLR640.

Its 6770cc motor is cooled by liquid technology and can cover distances of over four hundred miles before it might need refueling. The bike is, therefore, best suited for areas that have a poor infrastructure for refueling. As you ride this bike, you can attain a 650km range or more at a speed of exactly 90km/hr.

Under MAC-C1 technology, the manufacturers have now modified the engine of the HDT M1030 has now been modified to perform better. Due to this modification, this motorcycle can now run on seven different fuel variants including, truck diesel, biodiesel, and jet fuel (five variants).

The power of its engine is highly dependent on the quality of the fuel; however, the motor gives off 33hp and can revolve close to 7000rpm. It is good to note that this machine can survive very harsh conditions. It breaks through the water of 2ft depth because of its 610mm depth. Its heavy-weight is balanced by the wire-spoke, which is of military-grade, and a firm bash plate.

This motorcycle gets its name from Jochen Sommer; they originally designed it to suit the European and German markets. The failure of the Royal Enfield to make profits in the 90s, while importing models of the bike that were diesel-powered, sparked the invention of this alternative model.

In the 2000s, this German-based company (Sommer Company) changed this model and gave it a 462cc motor. The capacity of this motor is such that it can generate about 2000rpm.

Modern versions of Sommer 462 can give a high level of performance. The motor it has can churn up around 11hp, and it is a single cylinder that is made by using a Bavarian Hatz style.

The motorcycle gives more than 300miles when the tank is full, with a maximum speed of 65 mph, hence the unpleasant noise. The amount of fuel consumed by this engine is close to two liters for every 100km and it revolves near 4000 rpm.

The motorcycle has a belt-drive that is maintenance-free, and the motorcycle is has four-speeds. It is contained within the frame of Royal Enfield, and the other primary parts stem from the brand as well.

It is not a good idea for you to kick-start the engine when you are in the middle of cruising because of its 20:1 compression. It is a German-made, hand-built machine, and that is the reason it costs a lot.

It is common knowledge that petrol motorcycles are much faster than diesel engines; even diesel bikes perform poorly on the streets. Two models have proven that diesel motorcycles can perform at high-power- they are HDT M1030 and Neander 1400. As compared to the petrol engine, diesel engines give off more torque with a lesser rpm.

It will take great skill and expertise to get diesel-powered bikes to give off a good torque. A large space is needed for these diesel engines to operate due to their transmission gears. The gearbox becomes big like the crankcase at the end, and you will spend a lot of money to make the diesel motorbike perform optimally.

Diesel-powered motorbikes will require more fuel volumes for them to deliver similar results to that offered by their petrol-powered counterparts. There will be no single fuel left in the diesel engine if the quantity of fuel put into it is the same as that of a small petrol engine.

The way they have designed diesel engines is such that they can cover very long distances (miles) for every gallon refueled. That is the compensation for the excessive fuel-churning of the diesel engine.

The reason most of these bikes are expensive is that only a few of them have been manufactured. The finesse of engineering required to get diesel bikes to work almost at the same level as the petrol engines is also a factor for the high cost.